**   migratory species some individuals of which have been found hibernating in the north (Estonia, Latvia and Lithuania)

All bat species are legally protected in Europe. Thus, there is a need for constant monitoring of their populations and knowledge-based action to protect them in contemporary environment.

Some species are relatively abundant and widespread (like Eptesicus nilssonii, dominating in all northern countries), some are locally abundant (like Myotis dasycneme in certain types of landscape), some are relatively rare (like Myotis nattereri, who requires specific habitats which are scarce in the north). Finally, some are accidental visitors, extremely rare species which often cannot be found even during in depth research, probably because they are present during very short periods (like Pipistrellus pipistrellus, P. pygmaeus and Nyctalus leisleri in certain areas of Estonia). 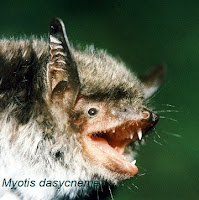 Pond Bat is locally distributed in eastern part of northern Europe. It is one of the largest sedentary bats in the north of Europe, with wing span up to 28 or 30 cm. It is also one of the two bat species of northern fauna strictly protected in Europe (ANNEX II – Animal and plant species of community interest whose conservation requires the designation of special areas of conservation – of the Habitats Directive, Council Directive 92/43/EEC of 21 May 1992 on the conservation of natural habitats and of wild fauna and flora). (photo by Matti Masing, 1996)

During summer it usually lives in areas offering large water bodies such as rivers, lakes and sea. Nursery colonies consisting of adult females and their young live at sites abundant with insect food, which the bats catch when flying over water surface during the night. These colonies often live in the vicinity of lakes and larger rivers, and their daytime roosts are situated below the roofs of relatively large buildings such as churches. Males sometimes form summer colonies, but they can also live solitarily in relatively poor summertime habitats.

During winter, Pond Bat can be found hibernating in relatively warm and damp underground sites like abandoned mines and tunnels, sometimes in hundreds like they do in Piusa caves, south-east of Estonia. 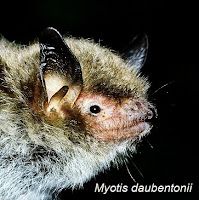 Daubenton's Bat is similar to Pond Bat but is smaller (wing span about 25 cm, a medium-sized bat), thus easily distinguished when in hand or when hibernating on a wall of an underground roost. It is one of the five species of Myotis-bats, being the most common of them. During warm part of the year it can be found roosting in tree-holes (up to 20 or 50 animals together) usually situated not far from water, and not high from the ground (from 2 to about 10 m). During the night they fly over relatively still and clean water surface, often in groups. This bat is remarkably afraid of light as this can be dangerous to its survival (e.g. owls can spot them, and easily catch). (photo by Matti Masing, 2002)

Sometimes this bat also flies in the forest or over meadows close to a body of water. At certain places and in certain time of season it even prefers hunting over the land, which it usually does not higher than only 5 metres from the ground – typical height of flight in most medium-sized and larger species of Myotis living in Europe.

During winter, Daubenton's Bat can be found hibernating in relatively warm and damp underground roosts like abandoned mines and tunnels, sometimes in tens or hundreds, rarely in thousands like in Piusa caves, southeastern Estonia. Single bats or small groups may hibernate in abandoned cellars if the conditions in them resemble with those in natural caves. 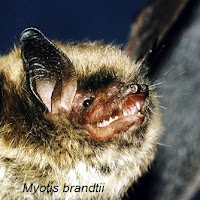 Brandt's Bat is a typical bat of boreal forests in Eurasia. Sometimes it lives in towns if there are suitable habitats resembling primeval forest. It is a relatively small bat with wing span about 25 cm and body weight 5-8 g.

It forages in forests of primeval type which in the north often contain Norway Spruce (Picea abies). There it feeds flying in small circles between treetops, often about 15 m from the ground.


It hibernates in underground sites like artificial caves. But most animals probably hibernate in buildings. (photo by Matti Masing, 2002) 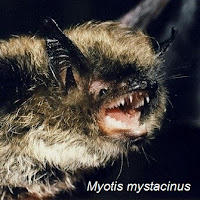 Whiskered Bat is a relatively rare bat in the north of Europe. In Estonia it is found in wet Common Alder (Alnus glutinosa) forests situated in coastal region. There it forages during relatively warm nights in spring and summer, often flying 2-5 m from the ground. Sometimes it also lives in towns.

It is a small bat, sibling species of Brandt's Bat, with wing span 19-24 cm and body weight 3-6 g.
In the north of Europe it is very rarely found at underground sites. Most animals probably hibernate in buildings. (photo by Matti Masing, 2002) 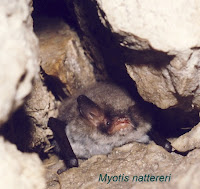 Natterer's Bat is widely distributed in central Europe. But in the north of Europe it is found locally in some of the best habitats, which should be preserved and protected. It is a medium-sized bat with wing span 24-28 cm, characteristic light face, rounded ears and whitish belly.

During summer it is found in deciduous and mixed forest, old parks and surroundings of bogs. It flies below the canopy and by small bodies of water, usually only a few metres from the ground.

In Estonia it is known to live in old manor parks where it uses abandoned limestone cellars during autumn and winter, like the animal on this photo. (photo by Matti Masing, 2002) 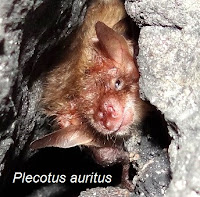 This bat is widely distributed over vast areas of Europe. Among five species of Plecotus known to live in Europe only one species (Plecotus auritus) is found in northern Europe, north of 55 degrees n.l.

It is a medium-sized sedentary bat the individuals of which live in the same climatic region all year around. During autumn and winter it uses underground sites like cellars, fortification tunnels and artificial caves. Just like the animal on this photo, looking out of a crevice between limestone bricks situated in one of the limestone tunnels in Narva, Estonia. (photo by Matti Masing, 2011)

It forages on moths, which it often eats at selected places in attics or underground rooms. The wings of eaten insects fall on the floor, thus providing an easy detection of this night-active bat. It is a relatively bad hibernator, thus being active during late autumn and early spring collecting moths from trees and from the walls of underground rooms. 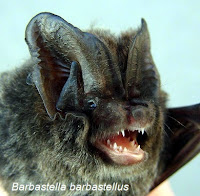 Western Barbastelle is one of the two bat species of northern fauna strictly protected in Europe (ANNEX II – Animal and plant species of community interest whose conservation requires the designation of special areas of conservation – of the Habitats Directive, Council Directive 92/43/EEC of 21 May 1992 on the conservation of natural habitats and of wild fauna and flora).


It is a medium-sized bat with characteristic dark ears the edges of which are in touch on rostrum. It lives in mixed forest, and it likes oak-trees (Quercus robur). In Lithuania it has been found also in towns like Biržai, Kaunas and Vilnius. It has been found only once in Estonia, but has a resident population in central Latvia.

It forages on moths which it catches flying along forest edges. It hibernates in underground sites and in buildings. In contemporary Europe it is threatened because its habitats are scarce. (photo by Matti Masing, 2007) 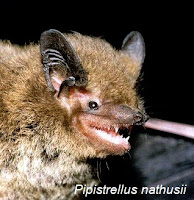