Like in other animal groups, species identification in bats is not always easy. Carolus Linnaeus recognized only two species of bat in Europe in 1758, the long-eared bat Vespertilio auritus, and the short-eared bat Vespertilio murinus. Two centuries later, about 30 bat species were known to live in Europe. However, modern taxonomy based on DNA analysis has revealed even more bat species, and new species are still being described ...

All those „relatively new species“ belong to sibling species' groups. The separation of those species has not been very sensible until recently, when sophisticated research methods became available for scientists. Therefore it is not surprising that bats belonging to the group of sibling species cannot be identified on species level easily. Often a set of relative characters, instead of absolute ones (which simply do not exist), have to be used to identify those species for sure.

Recently, a new handbook of European mammals was published (Dietz, Nill & Helversen, 2009), which summarizes modern achievements in the taxonomy and diagnostics of European bats. Identification characters presented in this book can be used to identify almost every European bat.

Today, bat species are very often identified on the basis of their sound. Since Ingemar Ahlén's work on the sound diagnostics of European bats (Ahlén, 1981) many bat scientists as well as amateurs in Europe have used sound characters to identify bats in flight. During a few decades the sounds of European bats have become the main source of information in various types of field research including bat survey, monitoring bat populations, measuring bat flight activity, revealing the value of different habitats for bats, etc.

The identification of bats based on their sound

Ultrasound equipment called bat-detector is used to find, identify and count bats in flight. Several types of detectors exist, two of which have been widely used in northern Europe. (Figs. 1–3)

First, heterodyne detector (like Pettersson D100 and Pettersson D200). This is a pocket-size apparatus with a sensitive ultrasound microphone and a heterodyne system making bat sounds audible to humans. Using different characters of sound many bat species (especially those belonging to the group of narrowband bats, Masing, 2006) can be identified on spot, just by listening to the detector.

Second, time-expansion detector (like Pettersson D240x and others). Those can be also pocket-size, and usually include also a heterodyne system. In this type of detector the original bat sound is expanded (often 10 times), thus species specific character states can be picked by a human ear. This type of detector helps to identify also broadband bats. Those emit often very short pulses not identifiable from a heterodyne detector.

Both types of detector are widely used in bat surveys and bat monitoring; and this is also the equipment that our research team has used during bat work in European towns. 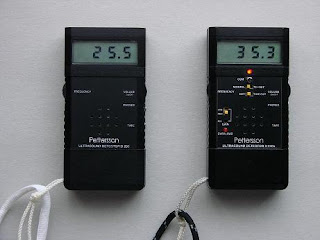 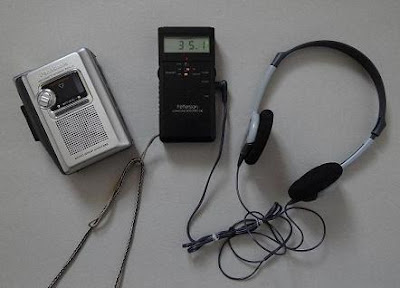 Fig. 2. A Pettersson D240x bat-detector in action. Frequency is set on 35 kHz on which most boreal bat species are audible. Earphones are attached to the detector, thus sound quality is good. Bat sounds can be recorded on the tape for further reference, species' identification and bat-related education. 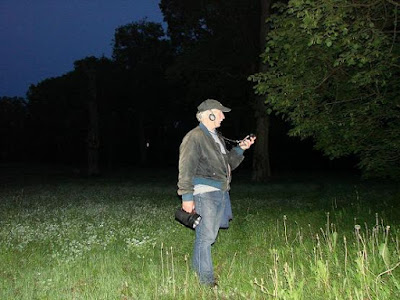 Fig. 3. Kazimieras Baranauskas doing fieldwork on bats in Vilnius. A Pettersson D200 detector and a strong hand torch can help to identify most bat species present even during the darkest night. (photo by Matti Masing, 2010)

During the last decades, the identification of bats basing on their echolocation calls emitted during the flight has become an important part of field research on bats. Special articles and even handbooks have been published presenting sound characters suitable for separating bat species (Ahlén & Baagøe, 1999; Skiba, 2009; Barataud, 2015).

However, not all bat species can be identified in the field with the 100% probability. Thus, a simple classification of species identification certainty levels (ICL) has been implemented in detector-based bat studies in Estonia, which is the following (Masing, 2009):

Level A) bat species has been identified with nearly 100% of certainty basing on species specific sound characters and (sometimes) visual observation of the flying bat (species is proved, no need for further verification);

Level B) bat species has been identified with about 95% of certainty basing on species specific sound characters, the occurrence of which is unlikely in other bat species living in the study area (species is almost proved, but further verification is advisable, Fig. 5);

Level C) bat species has been identified with about 50% of certainty basing on species specific sound characters, which, however, can be present in other bat species living in the study area (species is not proved, requires further verification).


Bat scientists and bat observers using ultrasound detectors often record bat sounds in the field for species identification carried out indoors later. But even then not all bats can be identified with certainty.

Narrowband species (bats belonging to genera Pipistrellus, Hypsugo, Eptesicus, Vespertilio, Nyctalus, Tadarida and Miniopterus) are easier to identify on the basis of their sound as their sonar pulses have peak frequency intervals, which are often species-specific.

On the other hand, broadband species (bats from genera Myotis, Plecotus and Barbastella) are relatively hard to identify on species level because their ultrasound calls often do not have peak frequency and other sound characters within species-specific intervals. (Masing, 2006)

Sound characters suitable for the identification of bat species

To analyse recorded bat calls, and identify from them bat species, we have used Pettersson Elektronik AB BatSound programme, which has been an excellent piece of equipment for this job.

Below on Fig. 4 are shown three BatSound figures opened in a PC. From these figures it is possible to see and measure the main sound characteristics suitable for species identification of boreal bats, which are the following (Masing, 2004):

1) pulse length (PL) in mm, measured either from oscillogram or from combined figure of oscillogram and spectrogram (when the  pulse is weak);

2) intrepulse interval (INT) in mm, measured either from oscillogram or from combined figure of oscillogram and spectrogram (when the  pulse is weak);

3) start frequency (SF) in kHz, measured from spectrogram (in weaker pulses the treshold level must be changed to see this character);

4) end frequency (EF) in kHz, measured from spectrogram (in weaker pulses the treshold level must be changed to see this character);

In addition to the above basic characters, also pulse shape (6) visible on spectrogram (sonogram) is often a helpful character. This character is easy to observe but relatively hard to describe in words. 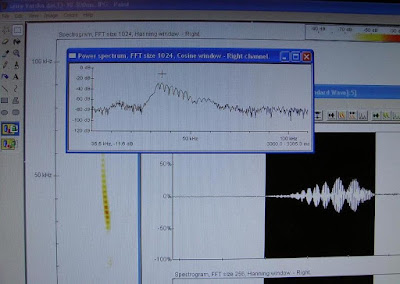 
Fig. 5 presents an example of BatSound spectrogram in which four consecutive pulses of a bat's sonar are visible. Analysis of this sound has resulted in identifying this animal as Pond Bat (Myotis dasycneme). The identification certainty level (ICL, IC level) of this animal is B (probability of correct species identification about 95%). 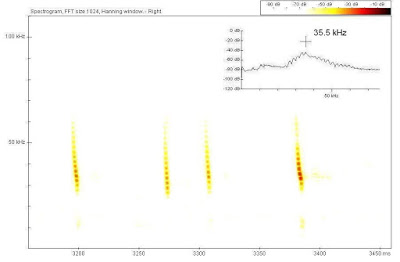 
Ahlén, I. & Baagøe, H. 1999. Use of ultrasound detectors for batstudies in Europe – experiences from field identification, surveys and monitoring. – Acta Chiropterologica, 1, 137–150.