Why „Bats in towns“?

Towns are important habitats for people. So why should somebody connect this habitat type with bats, night-active small mammals which originate from natural habitats like forest, steppe, caves etc.?

Answering the above questions will considerably broaden our knowledge about ecological requirements of bats as an animal group. Because human settlements have become a widespread habitat type all over Europe, this habitat type can potentially influence the life of various animals, including bats.

Without studying bats in towns it is simply impossible to know about how towns influence bat populations living in the area. What should people do with bats living in towns? Should we protect these bats? And if yes, then how? 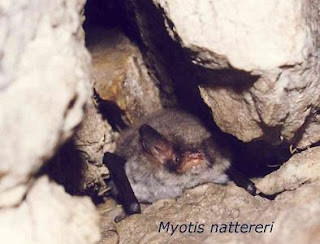 Natterer's Bat, a threatened bat species living on the verge of survival in some European towns. (photo by Matti Masing, 2002)